on September 08, 2013
In my last post, I mentioned we were having quite the Labor Day Weekend adventure.  Unfortunately it wasn't what was planned but we adjusted.  It all goes back to last summer and our Fourth of July vacation to Priest Lake.  There seems to be a holiday theme happening here, I'm going to be watchful next summer.

Terry injured his back on that trip.  He did something minor mid-week and then the last day, hit a bump on a stream crossing and did full damage.  I drove home while he tried to survive 12 hours in the car.  The prognosis once he had an MRI and several doctor visits was a herniated disc with fluid and fragments and so on.  The doctors agreed that since he had actually started recovering over the week of visits, that surgery could be delayed.  If they had seen him the day it happened, they said no question, they would have gone in.
He spent most of July and August in pain but doing rehab, shots, and whatever it took to get back on his bike.  He gradually went from mountain biking on the road to the road bike to mountain biking on the trails.  By September, I was done with the marathon and we enjoyed some awesome Fall rides.
Terry diligently worked on his flexibility and strength, but still had on and off issues thru the winter.  The ski season went fairly well with only a couple instances where he felt something was amiss.  He took a spare bike and trainer to work and has been riding at lunch time several times a week.  Since he hadn't been able to sit on our couch since last July, we bought a new chair in order to get him off the floor.  He also started going to body work (specialized sports massage) each month.
Everything was helping, he rode strong all spring and summer and we couldn't wait for Labor Day weekend to spend 3 long days out on the trails.  The colors were changing, we didn't have any company or plans, and the weather was supposed to be perfect.

Saturday morning, we had the truck pulled out and were putting things together for our ride when Terry re-injured his back as he walked up the steps.  That was it - the ticking time bomb in his spine had just gone off.  Labor Day weekend was now under adjustment.

Luckily, Terry was able to reach his doctor and get a prescription for muscle relaxants and pain pills.  He didn't have radiating pain down his leg this time, which was probably a good thing but otherwise he said the pain was similar to last summer. Worry and depression about spending the next several months recovering was as painful as the actual thing.  I couldn't even lift his spirits with ice cream.
He went back to the floor and other than short little walks around the kitchen, didn't do much for the next 3 days.  I stayed close all day Saturday in case things got worse, then Sunday and Monday went for a couple mountain bike rides with our friend David.  I would go on and on about how great the trails were, but Terry reads my posts and then he'll realize what he missed and be more down.
Christian visited for several hours on Sunday and they watch car shows together.  Although Terry was depressed and in pain, CB's awesome positive attitude was exactly what he needed.  It definitely puts things in perspective.

On Monday, I missed the parade but spent some time with the girls (Kelly & Corrie) and the kids at lunch before going back to lift Terry's spirits.  He wasn't getting much better with the medication, so we had assumed that Tuesday would be another MRI and scheduling surgery.

After a discussion with his doctor, they decided to try a 6 day steroid treatment to relieve the inflammation.  He cautioned against back surgery at this point so Terry stayed home from work and started the treatment.  He was able to get into work a couple days and spent most of the time standing at a drafting table.  Not the most ideal situation, but boredom had set in and there is only so much television you can watch.

Other than being ready to help with doctor visits, driving, and picking up medication, I had a normal work week.  I hit the trails and enjoyed a road ride with another friend from cycling class, Steven.  Both he and David have had back surgery, so they were kind enough to listen and sympathize this past week.
The other factor at play here is our vacation to Italy for a couple weeks of riding. We haven't been for years and have been looking forward to it for over a year.  It's obviously not the best timing but we'll figure it out.  The important thing is to get Terry healing mentally and physically again.  The ice cream is starting to disappear, so things are definitely improving.

Yesterday, he made it to see Corrie finish the marathon and then later went for a bike ride.  Just like last summer, we figured he could start on the mountain bike on the road.  We rode 25 minutes out and then he needed to go back.  We were a couple miles away when a thunderstorm unleashed lightning, heavy rain, and a little hail.  We were soaked by the time we got back to the truck.  Terry's back wasn't worse, but wasn't better so back home for more time on the floor.
Today, we woke to more rain.  It looks like it rained thru the night and doesn't plan on stopping.  I had hoped to get out for another mountain bike ride today, but it seems unlikely.  I did get a nice ride in yesterday morning between Corrie's start and finish.
Maybe it will dry out and I can get Terry out for another attempt on the road, minus the lightning and hail.  We'll have to make a decision on Italy soon but for now, my fingers are crossed that this morning's body work treatment goes well and the upcoming week brings some good back karma.
Injury 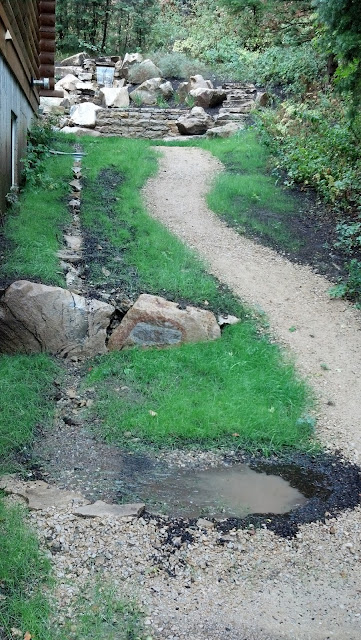 Update on last week's post: Terry is feeling better, but still in pain.  The MRI results confirmed damage along his spine, but the plan for now is to medicate and recover while avoiding surgery.  He is doing better, but not ready to fly to Italy, ride for 2 weeks, plus spend one of those weeks standing at bicycle races after riding all morning.  Alas, we've made the decision to cancel the trip.  We are definitely bummed to miss out on all the adventures, but recovery is more important. It rained most the day last Sunday and throughout the week, which is quite unusual.  Although, as we see flood coverage from Colorado, there is no room to complain about a week's worth of rain.  We were fortunate to be on the edge of the storm and not have any destruction. Sunday Rain Puddle Since we couldn't get out last Sunday, we were blessed with entertaining moose visits.  As the rain backed off, mama came down for a drink and walk-about.  We watched her expertly maneuv