on June 04, 2013
I'll get back to the last few days of our California Cycling Vacation posts soon, but first my 100 Miles of Nowhere Race Report.

I’ve been a Fat Cyclist reader off and on for several years, drawn in by the crazy cycling adventures but captivated by his passion for fundraising and fighting cancer.  This past year, the fight got personal when my friend and neighbor Christian (CB) was diagnosed with Hodgkin’s Lymphoma Stage 4.

CB is 35, an amazing mountain biker, a wonderful friend, father of 2 young girls, and husband to Corrie.  Corrie is also a gifted athlete and incredible person.  Somehow, with all their relatives 2000 miles away, they’ve maintained a reasonably normal atmosphere for their girls while CB battles the Big C.  If you haven’t guessed already, I love them like family and am very proud of how they are handling this entire situation.

Since late April 2012, CB has undergone emergency heart/lung surgery, chemo, 2 fairly new treatments that didn’t work, and finally radiation in an effort to beat the Big C.  It had no idea what it was up against with CB and he is winning! The tumor has shrunk and he starts the stem cell transplant process next week.  He has had a better attitude about this than most of the people around him.  He’s kept up his mountain biking, passion for climbing, and most importantly been the best father and husband considering the circumstances.

When I saw @fatcyclist mention it was time for 100 Miles of Nowhere, it was time for me to act on CB’s behalf.  Since his girls would be too young for Camp Kesem, I decided to pledge $ for their summer activities and encouraged CBs friends to do the same.  I hadn't given the route much thought until the sponsor bag arrived.

After looking at my calendar and CB’s transplant schedule, the only day that made since was Sunday, June 2.  Terry and several others told me I would be in for some suffering since I was planning to ride 100 Miles of Nowhere the day after I rode the Little Red Riding Hood Century, but nothing would come close to what Christian and Corrie have been going thru.

Once I made sure I survived the LRRH ride, I sent out an email Saturday night letting everyone know I would be riding the DV for CB.  My route was a 1.25mile loop around the Deer Valley (DV) parking lot.  I had done a course recon earlier that week and estimated 80 laps and 3000ft of climbing.  I was pledging $1 per girl per lap – so $160 total and challenged others to come out and ride a few laps with me or donate.

I woke up energized and excited for the day, packed up the car and drove to Deer Valley.  I set up in the parking lot and officially started at 8:30a.  I was alone, but content.  I documented the day on my twitter account.

The first 8 laps (10 miles) went quickly.  It felt good to pedal out the pain from Saturday and have some time alone to think about what CB had been thru and would be going thru over the next several months.

I stopped to grab my buds for the next 10 miles and put them immediately away when friends Erin and Tyson pulled in.  We chatted briefly, then I took off while Erin went on a hike and Tyson rode 2 laps with me on his mountain bike.  The wind had started to pick up so I was happy to have him draft.  By that time, friends Jay & Marshall arrived to mountain bike with Tyson so the 3 of them took off after putting some cash in my pledge bottle.

Thanks to Tyson for video coverage

By that time, I had completed another 8 laps and only had 80 miles to go.  I rode the next 10 miles alone against the wind, but the DV neighborhood was starting to wake up so I had plenty to watch while doing clockwise circles.  I’m pretty sure there were at least a few neighbors that kept tabs on me all day long, or at least it helped me to think that and keep up the pace.

Mile 30 came and my good friend Kelly arrived with her 2 children.  I rode the next 8 laps while they walked/strollered/pedaled counterclockwise.  Every time I came around, her oldest would ring his bike bell and her youngest would wave. Those 10 miles flew by!

I stopped at Mile 40 and told them thanks and goodbye and almost as if someone was coordinating support, Terry pulled in.  He was fired up and picked up my pace as we continued to battle an ever changing wind.  It was rolling over the mountains and just swirled, like a toilet bowl.  I thought a lot about the science of wind on Sunday.

Terry moved me quickly to Mile 50, but had too much energy and I couldn’t keep the pace any longer.  I had him take a halfway photo, then sent him off to climb Guardsman Pass for a couple hours, knowing I'd need him back for the final push.

Back to solo riding to start out my last 50 miles and was I getting to know every single bump, hill, and inch of that 1.25 miles. I put my head down against the wind and pedaled on.

I was only a few laps away from Mile 60 when friends Eric, Kristi and their 3 youngsters arrived with bikes and encouraging words.  I said hello and planned to stop at 60 to visit.  Just as I came in, friends Max and Julie arrived on their bikes.  I made an immediate decision to push out my stop in order to take advantage of being 3rd wheel for 4 laps (5 miles).  They really made a difference and by the time they left I only had 35 miles to go!

I was resting at Mile 65 when the guests of honor arrived.  Of course, CB immediately gave me a hard time for not riding, so I off I went for Mile 65 thru 75.  Kristi rode a couple laps with me and we swapped stories about LRRH.  Then she joined her boys as they raced against me a couple laps.

Now that CB, Corrie, their girls and CB’s mom and sister had arrived, the party in the Deer Valley parking lot got going.  CB and I rode a slow lap together which was pretty emotional for me, more now that I’m thinking about it than at that moment.  I’m really lucky to have such a good friend a couple doors away.

The kids were on their bikes going back and forth screaming encouragement and racing me, the adults were socializing but keeping me motivated as I rolled thru each lap, and Jay & Marshall were even there having a post ride brew.  I really wanted to stop and just hang out, but held out until Mile 75.

Before everyone left, I asked CB to ride one more lap with me, but this time driving and letting me motor pace.  I was dead, but gave it my all and had a blast.  Those were my best 2 laps of the day!

After that hot lap, I started to suffer.  Thankfully, Terry had come back from his climb and was ready to help me thru the last 25.  He kept my pace up, shielded me from the wind, and even talked more than normal so I could just listen.

I had to dig even deeper around the 90 mile mark, but pushed it to 95 miles before my last break.  Some of you Fat Cyclist fans might be wondering why I haven't talked about bodily functions yet, well there hadn't been any.  The back-to-back 100s were definitely factoring in.  I hadn’t peed since 8am even though I had been hydrating since Friday morning.  There was a honey bucket in the parking lot, so I made an attempt and got back to it. (if you refer back to the route map, that is the one line that seems out of place)

The last 4 laps were a relief.  I was proud of myself for the accomplishment, but felt even better about all the love that had surrounded the day.  CB has an awesome support team and we are going to do whatever it takes to get him back out on the single track healthy and leading our group rides.  Wonder if I’ll be able to convince him to do 100 Miles of Nowhere with me next year… 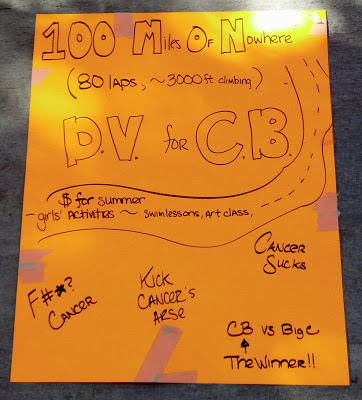 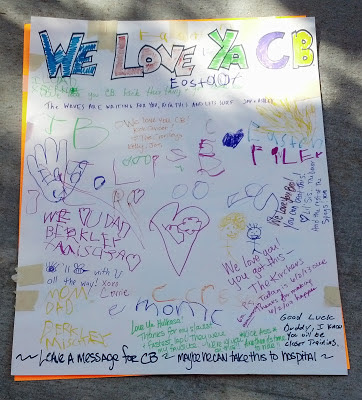 I'm still riding a Tulsa Tough high and can't say enough good things about the event and people involved, especially Shawn and Carol! Last year, I flew in on Thursday and out Monday and wrote a 6 part blog. I just reread it and many of the experiences hold true so please have a read to get a feel how I Tulsa Tough. This year, I took it up a level by flying in on Sunday and bringing my own bike! Having a full seven days to help Shawn and Carol, experience more Diva events, and get in more rides was awesome.

Unlike last year, I don't have time to blog about each day at Tulsa Tough so I've decide to list my top moments and pictures. I'm guessing only Carol and I will "get" the full list, but use your imagination or better yet, make plans for Tulsa Tough June 12-14, 2015 and make your own moments! If you were at Tulsa Tough, please add your own moments in the comments. I'd love to hear them so I can add them to my list for next year.
Sunday - June 1, 2014 …