The day had finally arrived for the Tour of California Individual Time Trial.  As soon as the route was announced and it was confirmed that there would be some type of Women's Race, we made our vacation plans.  It is no secret that I'm passionate about women's cycling and although they weren't getting the equality they deserved, it was a chance to support some of my favorite athletes.

I was pumped and woke before our alarm to finish packing the cooler and load the car.  We departed at 5:30a and 2 hours later pulled into a San Jose restaurant, very happy we hadn't left any later.  The volume of traffic in California is simply amazing.

After breakfast, we drove to the Start and found a free parking space in a lot owned by the best produce market in San Jose.  The owners were going out of their way to make spaces and since we were so early and the first to arrive, we made sure it was ok and then purchased some fruit for the day.  Sometimes it is the simple acts that make the biggest difference.  We ended up parking there for 9hrs!

We changed into our kits, rode to the official start, and continued to ride the 1st 25km of the Stage 6 route.  We rode reasonably hard imagining we were racing, but took time to thank the volunteers and keep an eye out for team cars that were driving the course one last time.  At one point, we saw a couple RadioShack Team cars off to the side but didn't pay much attention until a few miles later when the entire team passed us!  I would hear them coming and after they quickly passed, would watch them catch Terry, hang on his wheel for a fraction of a second and then pull around.

There was a break after a couple riders, then the others caught us.  I pulled off and wished them all good luck.  Terry had taken his phone out but continued to ride figuring they would be passing and he could snap a picture, but he beat the 2nd group, including yesterday's winner Jens Voigt, up the Cannondale Castle hill and then watched them fly by.

We probably could have gone home at that point as our excitement levels were pegged, but we still had to finish the course and watch the race.  We got back to the car and changed, then walked back to the Start area to check out the festival and find the team bus area.  I wanted to find the women first since they would be warming up for their early start times while the men would still be on the bus relaxing.

On our way, we walked by RadioShack and Jens was out working the crowd.  I knew a picture with him would be exciting for my twitter friend @melissagerman so I got his attention and he obliged.  I told him he passed us on course and I thought I had seen him suck Terry's wheel.  He agreed and said of course he did, that's what he gets paid to do.

We were having such good Tour karma, I couldn't wait to go see the women's teams.  Unfortunately they were inside a gated parking lot and we weren't allowed in without credentials.  The parking lot belonged to IBM and we were told for security reasons they didn't want the general public on it.  It didn't make sense so I tried to convince the security guard otherwise, but he wasn't budging.  I could go on and on about this and other equality issues on Friday, but I'll save it for a more specific blog.

We watched thru the fence and then carried on to the accessible women riders, like Jade Wilcoxson and Brianna Walle with Optum Pro Cycling Team. Since they have a men's team as well, they were all warming up together in the "men's parking lot".  Crazy to think a week later, Jade would win the US National Road Race.

About 20 minutes before the women were scheduled to go, we walked back to the Start House and secured a great spot on the barrier.  We stayed put for the next several hours and watched every single woman and man start their time trial.  It was an unbelievable experience to see the riders arrive and go through their preparations and rituals. The interactions between the racers, mechanics, fans, and officials kept us so occupied we barely took time to eat our packed sandwiches and fresh fruit.  We loved every minute of it and took over 100 photos, but not even a video could describe what an awesome atmosphere we were immersed in. 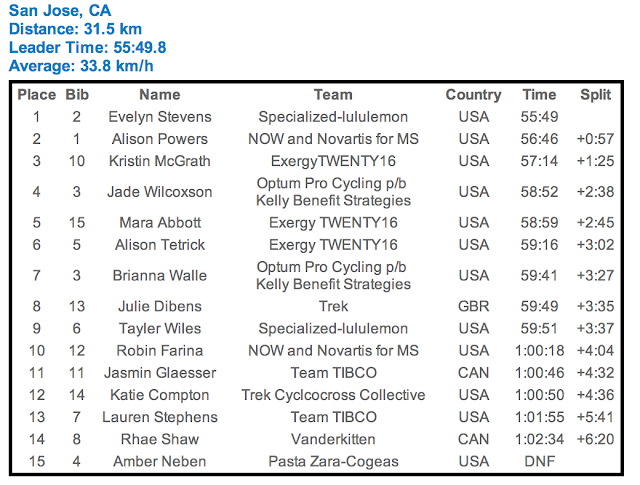 Here are just a couple shots of the men, who had 111 starters compared to 15 women.  They also went off every minute or longer compared to the women at 30 seconds.  You can see why the process takes a couple hours. Hopefully next year, the Tour of California steps up and includes an entire women's stage race or at the very least a full Time Trial field with 100+ women.

After all the riders were off, we returned to the team bus area and ran into Park City friends so we hung out and talked until the end of the race.  We were between the BMC bus and the Scratch Labs kitchen, where the riders ate, so we saw many of the men again, including Jens.  He seemed more comfortable hanging out at the grill than on the bus.  We follow all the BMC riders and staff closely so it was fun to see them all come in and then wait for news from the Finish.  We finally got news that Tejay won and were thrilled for the team as they celebrated.

We walked back to the car, drove to Palo Alto for some shopping and dinner, and then back to the cottage by way of the Golden Gate Bridge.  What a full day!  The best part was we would get to do it again tomorrow on a mountain top stage.  Luckily it was closer, so we didn't have to set an alarm.

I'm still riding a Tulsa Tough high and can't say enough good things about the event and people involved, especially Shawn and Carol! Last year, I flew in on Thursday and out Monday and wrote a 6 part blog. I just reread it and many of the experiences hold true so please have a read to get a feel how I Tulsa Tough. This year, I took it up a level by flying in on Sunday and bringing my own bike! Having a full seven days to help Shawn and Carol, experience more Diva events, and get in more rides was awesome.

Unlike last year, I don't have time to blog about each day at Tulsa Tough so I've decide to list my top moments and pictures. I'm guessing only Carol and I will "get" the full list, but use your imagination or better yet, make plans for Tulsa Tough June 12-14, 2015 and make your own moments! If you were at Tulsa Tough, please add your own moments in the comments. I'd love to hear them so I can add them to my list for next year.
Sunday - June 1, 2014 …