on July 20, 2012
Boise hometown hero Kristin Armstrong crashed during the Exergy Tour Prologue leaving the locals stunned and the media focusing on her recovery and chances to make the Olympic Team.  She immediately had surgery, started riding, and made the Olympic Team in both the Road Race and Time Trial.  Fast forward to this week, as she dominates the Cascade Cycling Classic with 3 stage wins and currently holds 1st place with 2 stages remaining.  She has obviously healed, is focused, and ready to bring home another Gold medal.  All the American women are riding strong and the other countries are bringing impressive teams, so hopefully many new fans will watch and help bring women's cycling the attention they deserve.

Many of the women that will be contending for Olympic medals raced in The Exergy Tour.  As I've mentioned in my 2 previous Exergy blogs, I volunteered full time as a Traveling Course Marshal (TCM) and was literally part of the Tour.  The Tour was in May, but as I've had time, I'm posting about my experience.

After beautiful weather on Thursday evening for the Prologue, we woke up to cold and rain on Friday morning.  Sharon was volunteering in Parking and had to be at the Start by 7, so we drove together and I told my team I would meet them there.  The wipers were in full force the entire drive to Nampa and all I could think about was how thankful I was to have long underwear, hiking boots, and rain gear.  Stage 1 was 75 miles and scheduled from 11a to 3p which meant I would be out in the elements that entire time plus 2hrs prior.  We arrived just as it was getting light, bundled up, and shuffled under my umbrella in search of the Parking Check-In.  It was tucked away in the Senior Center where Media would also be doing post race interviews.  I knew I would be back after the finish to listen to tales from my cycling heroes about their day.
Sharon got her marching orders and we hustled back to her post with a couple others and positioned the cars so they could stay warm and dry inside and then jump out to direct traffic.  We were on the main entrance to the hospital, senior center, rec center, and apartment complex so Sharon didn't spend much time in the car.  I figured I had 6hrs to spend in the rain, so took advantage of the heated seats.

A little before 9, I bundled back up and ran thru the downpour back to the Start/Finish to hook up with Van 1 and my team.  The teams had started to arrive, but like us, they didn't see any point in getting out of the cars to early.  We were covering the 2nd to last section of Stage 1 which meant we would drive almost the entire course (probably 65 of the 75 miles) and then drive back while dropping people off.  While we drove the course, we got to know each other a bit more.  Most of my van was from California and some had recently worked the Amgen Tour of California, while a few others were from Boise.  We all were cycling geeks and got along well.  In the meantime, the 4 van leads communicated and discussed coverage and course cleanup.  At one point, we turned back around and got out to clean grass off the road with brooms that we carried under the seats.  A farmer must have driven by just after we went by and dropped part of his load.  By then, the rain had stopped, but the road and grass were wet which made for some hard work.  We took turns and when we weren't shoveling, grabbed a lunch box and ate.  Lunch was a veggie sandwich, fruit, cookie, and chips.  I brought my hydration pack each day, so had plenty to drink and enough space to store clothing, camera, and sunscreen.
After our road cleanup, we piled back in the van and headed back toward our section.  All chatting stopped when we got to our first post.  It was time to pay attention and with the race already started and behind us, it was getting exciting.  As the van driver, Shawn would have the 1st post with van lead David either with him or nearby.  As soon as the race passed, he would jump in the van and join the caravan and pick all of us up and the race sped by.  We drove thru our section talking about possible dangers, cleanup, spectators and identifying posts.  I didn't realize until later, but if you want a post, you speak up and call it so when the van comes back thru, it's yours.  Since watching the race and being as involved was important for me, I made sure to call my posts a couple times in future stages.

We got to the end of our section and the fun began, the first person jumped out and then we turned around and headed back into the race dropping people off.  We didn't stop long, usually you knew what to do before going, but sometimes would take a broom with you or David would get out and go thru special instructions.  All us newbies were a little nervous, there were lots of rules, but it was hard to see how they all applied.  Since I was sitting in the back of the van, I was one of the last to be dropped off and obviously would be one of the first to be picked up.  I was so busy the previous night, I didn't care if I was positioned in the middle of nowhere with not much to guard.. and that's exactly what I got.
I had one road to watch that came out of a development, but the view was great and I was tired of sitting in the van.  The sun was also starting to warm things up so I exchanged my ski hat for my official Exergy baseball hat.  I had checked the race enough on my phone that my battery was low, so took a couple pictures and then hung out.  After an hour or so, a few home owners from the development came down to watch the race, so we chatted and I answered questions about the race and cycling.  I had no idea, but that's one of our hidden jobs as ambassadors to the sport which is fun, especially when young children would get so excited.  I walked the road a couple times and kicked off stones and debris, then settled in for the race.
About 10 minutes before the caravan arrived, the head Course Marshal Les drove thru to make sure all was ok. Thumbs up and he moved on.  Just like the Tour de France, the first cars and motorcycles came flying by which meant I officially locked down the road and didn't let anyone on or if they were on, I turned them off.  I didn't have much action, so was able to watch the peloton go by.  The women had broken apart on the climb, so there were several groups and some stragglers.  Eventually, all the racers came by and then the end of the caravan.  When I saw my moment, I crossed the street, raised my flag and as the van slowed down, I jumped in.  Literally!  Shawn slowed down a bit, but since we were in the race, there was no stopping.  You jump into the first bench seat and let the door shut on its own and then head back to the back before the next pickup.  Crazy the first time you do it and then by the end of the week, you're a pro and just trying to get faster each time.
We picked everyone up without too much trouble, one of the newbies had a broom and was a little slow getting in which resulted in shouts from all the experienced TCMs, but we all learned from the experience.  Our job was finished and all we had to do was be part of the race.  It was full speed to the Finish as the peloton ramped up their pace.  As soon as we arrived, we ran to the podium to see the final results and since Terry and Rob were there, I didn't go back to the van, but headed back to the senior center to watch the media interviews.  By the time I got in the car, I realized I was whooped but really pumped.  Being a TCM was awesome and supporting The Exergy Tour was awesome!  We got home and then found time for an hour ride before having dinner with Bob and Leslie.  They had just returned from Scotland, so we didn't party too late and headed to bed early.  The forecast was calling for more rain and cold but I didn't mind, I was hooked.
Other Exergy Tour Posts: 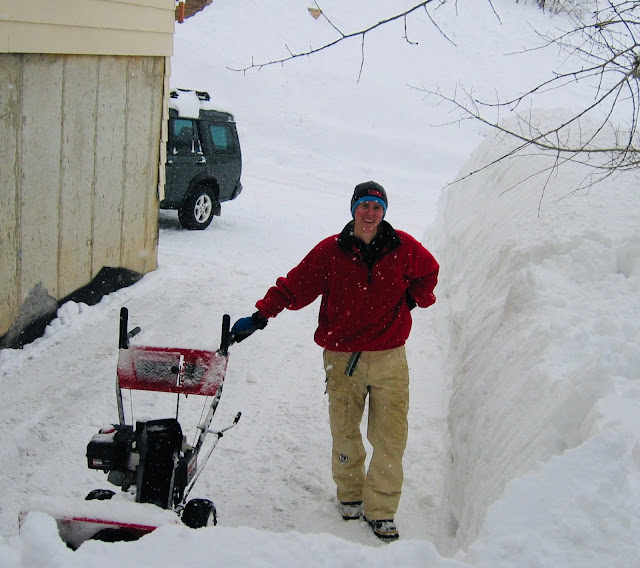 Hans and Torin, our Snowblowers

Snowblowers are a necessity in our neighborhood. We have long driveways, chunky plow piles, and snowfall averages similar to the ski areas. Shovels are for cleaning up the leftovers, steps, and decks. Everyone has their favorite snowblower brand and it's rare to let even your most trusted neighbor borrow your winter workhorse. If a neighbor is seen shoveling, the proper protocol is to ask if they are doing it for the workout or if their snowblower is injured. If they accept help, then you snowblow for them, being careful to follow their preferred blowing procedures. With season totals easily nearing 200", you have to blow the snow in the right locations from the beginning.

We've had snowblowers as part of our family since moving to the neighborhood 15 years ago. Our first was a used Toro that a friend in Salt Lake City sold us. It was a strong performer in the valley but suffered with the upgrade to higher elevations. It only made it one winter before we relegated him to …